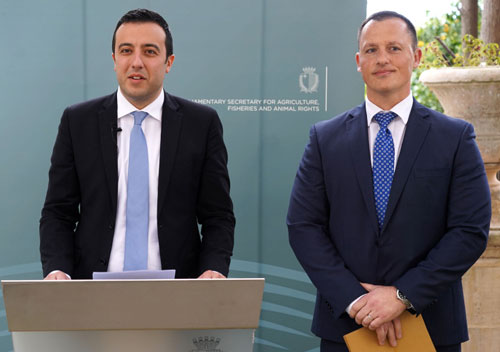 Parliamentary Secretary for Agriculture, Fisheries and Animal Rights Clint Camilleri, has said that once again payments have been distributed to animal NGOs, including Gozo SPC A, that are helping with the homing of animals. These NGOs continue to follow up all cases even after adoption takes place, he said.

He explained that the NGOs carried out checks and due diligence during the period January to October last year.

Parliamentary Secretary Camilleri also announced that a Bill has been introduced in Parliament for harsher fines on animal cruelty. He said that the government is moving in the right direction having introduced a number of laws to protect animals, but there is still the need to communicate the message that cruelty to animals will not be tolerated .

Camilleri thanked these organisations for their hard work in ensuring the wellbeing of animals and emphasised the importance of NGOs and the Directorate responsible for Animal Welfare working closely together.

He went on to explain that the Animal Welfare Promotion and Services Directorate (AWPSD) serves as an intermediary in a process for non-governmental organisations working with animals to provide permanent shelter for such animals.

It provides the necessary after care and shelter to animals which are victims of cruelty, injured or abandoned until these are taken up by the different NGOs for a more long term homing, said the Parliamentary Secretary.

These NGOs are currently benefiting from a payment as per the table below in order to carry out checks and due diligence with regards to the adopted animals.

Small-breed dog up to 10kgs (such as mixed-breeds, Chihuahuas, Poodles,Pugs,Yorkshires, etc) and less than 7 years old: €70

Medium-sized breed dog up to 27kgs (such as mixed-breeds, fox terriers, springer spaniels, etc) and less than 7 years old: €90

Senior dog over 7 years of age immaterial of size and breed: €130.

The Parliamentary Secretary urged more non-governmental organisations to follow in these NGOs footsteps and help with animal adoption.

He remarked that, “this Government promised to give this sector its deserved priority and reach its targets. The Government is committed to also help financially non-governmental organisations that work in aid of animals.”

The Parliamentary Secretary concluded by saying that the grants awarded to these NGOs is only one example how non-governmental organisations are being helped and recognised for the effort and valid and effective contribution to the sector.