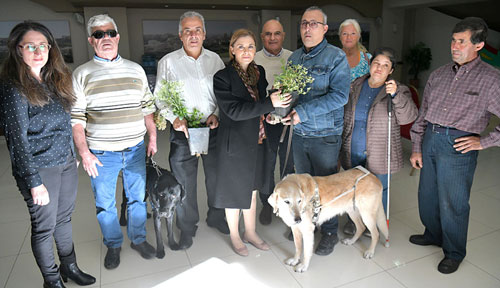 On the occasion of the International Day of Persons with Disabilities, which is celebrated on the 3rd of December, the project “Agriculture Beyond Light” has been officially inaugurated in Qala.

This project will mean the participation of visual and non-visual farmers working together, which has already been successful with the cultivation of seeds for the plant derived sweetener – the scientific name of which is ‘Stevia Rebaudiana.’The project leaders said that the plant also has several other health benefits.

The agri-mission of Agricultural Beyond is based on effective micro-organisms, a bio technology for an healthier life and general wellbeing for plants, animals and humans.

It said that Effective Microorganisms or EM is a mixed culture of beneficial microorganisms no Ogm, that can be applied to develop the microbial diversity of soils and plants in ways that can improve soil quality, and the growth, yield and quality of crops in a durable way.

We chose the Qala Council, as a network, on the ground that we chuck. Shoulder with the Council in its work to facing the Rural Environment Qala and Gozo.

During the project launch young ‘Stevia Rebaudiana’ plants were presented to the Minister for Gozo Dr Justyne Caruana and Qala Mayor Paul Buttigieg.